List and Maps, from the Oregon border to Big Sur 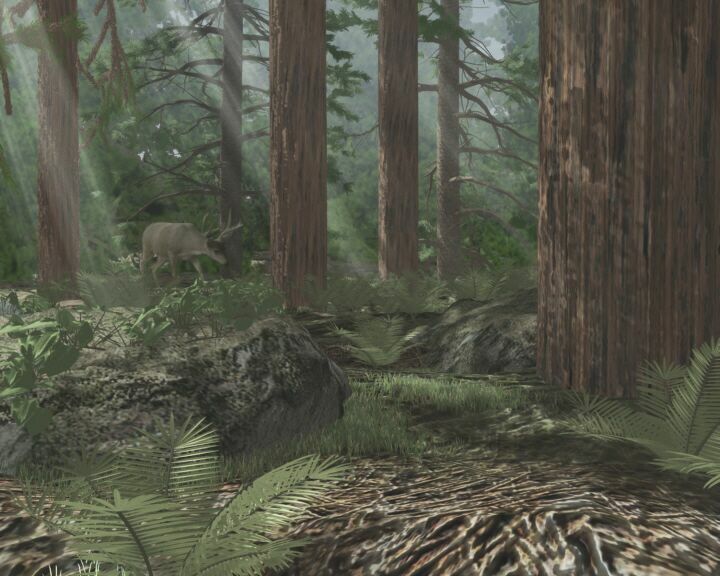 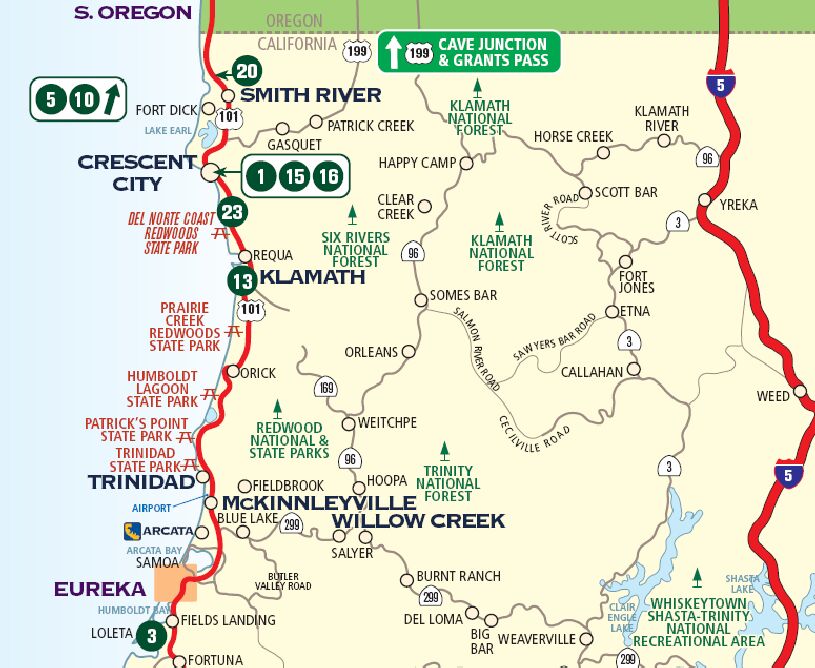 Established in 1929, this 10,000 acre predominately old growth coast redwoods park is bisected by the last major free flowing river in California Smith River. This is a World Heritage Site and Bio Reserve. Almost all of the park land is water shed for the Smith River and Mill Creek,a major tributary. Conifers other than redwoods include western hemlock, Sitka Spruce, grand and Douglas fir, as well as the less common Port Orford cedar. Primary examples of the understory include tanoak, madrone, red alder,vine maple, and California bay. Ground cover is dense with a wide range of species and varieties of shrubs, bushes, flowers, ferns, mosses and lichens common to the coast redwood environment.

Wildlife of the park is both abundant and varied including such animals as black bear, deer, coyote, bobcat, mountain lion, skunks, fox, beaver, river otter, squirrels, chipmunks and many others. Some of the rare or uncommon examples of bird life identified include the bald eagle, spotted owl, pileat woodpecker and marbled murrelet. The Smith River and Mill Creek are esecially known for the king salmon and steelhead trout runs in the fall an winter. Mill Creek is a spawning ground for these fish.

The park, established in 1929, is 6400 acres with approximately 50% old growth Coast Redwood and 8 miles of wild coastline. The park is a World Heritage Site and Bio Preserve.

The mixed understory includes tanoak, madrone, red alder, big leaf maple, and California bay. Ground cover is dense with a wide range of species. The campground development is located in an area that was logged in the 1920’s. Vegetation is predominately red alder which will eventually give way to fir and second growth redwood.

The topography is fairly steep with elevations from sea level to 1277’. The predominant mountain range is oriented in a north-south direction with steep cliffs adjacent to the Pacific Ocean, making the bulk of the rocky sea coast generally inaccessible except by Damnation Trail and Footsteps Rock trail. Approximately 1/2 mile of sandy beach is known as Wilson Beach or False Klamath Cove. This beach is unsafe for swimming due to steep beach slope, rocky conditions and frequent rough seas and cold water. Wilson Beach provides excellent tidepool opportunities at low tide. 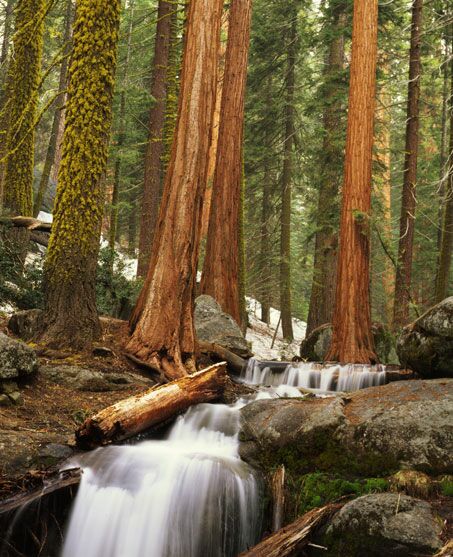 Set aside in the early 1920’s by the forethought of the people of California and the generosity of the Save-the-Redwoods League. Prairie Creek is a 14,000 acre sanctuary of old growth coast redwood. Designated as a World Heritage Site & International Bio Preserve. The park has over 280 Save-the-Redwoods League memorial groves. Prairie Creek offers hiking, nature study, wildlife viewing, beach combing, fishing, picnicking, a visitor center with exhibits and a nature store.

There are over 75 miles of hiking trails through verdant forests and along wild and scenic beaches. As the park is a preserve of uncut forest, all trails lead you through the world’s tallest trees. Nowhere can you better appreciate the splendor of a ancient redwood forest. Take time to walk some many and varied trails. There are all-day hikes and short leisurely strolls. The terrain is relatively mild with only 800’ of elevation gain through out the park.

Watch for native Roosevelt elk in the prairie along the N.B. Drury Scenic Parkway and on spectacular Gold Bluffs Beach. Gray whale, rabbit, squirrel, raccoon, mink, otter, fox coyote, mountain lion, bobcat, and bear might also be State Park otted. And of course the infamous banana slug, an important and welcome resident of the forest, is readily viewable.

Over 260 species of birds have been sighted within the park boundaries. The combination of open prairie, forest, stream side woodlands, coastal headlands, beach and ocean provides a wide variety of habitats. Some State Park species include the spotted owl and marbled murrelet, both believed to dependent on old growth forest.

The redwoods in the Grizzly Creek area were what inspired Owen R. Cheatham, founder of Georgia-Pacific Corporation, to preserve this site in perpetuity. Although Grizzly Creek Redwoods State Park covers only a few acres large enough to provide a sense of seclusion, and it receives so few visitors that on a weekday it is possible to be the only person in one of it groves of coast redwoods. The Cheatham Grove is an exceptional stand of coastal redwoods. The park is a quiet place to camp, hike, fish, swim and picnic. The Van Duzen River flows beside the campground. 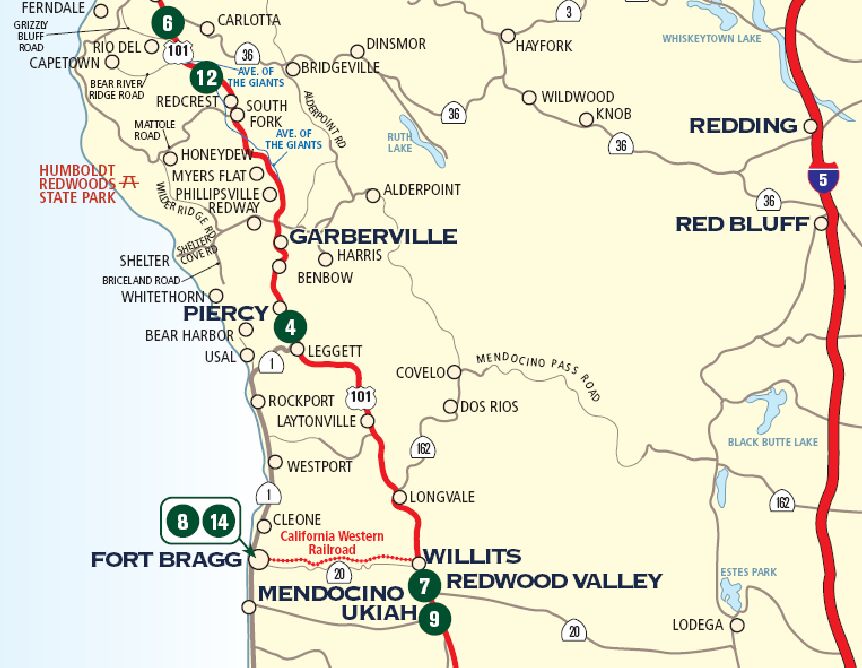 encompasses over 52,000 acres, including 17,000 acres of old growth coast redwoods. Created in 1921 with a small memorial grove the park has grown to include a diverse ecosystem including the entire Bull Creek watershed and the Rockefeller Forest, the largest remaining old growth redwood forest in the world. 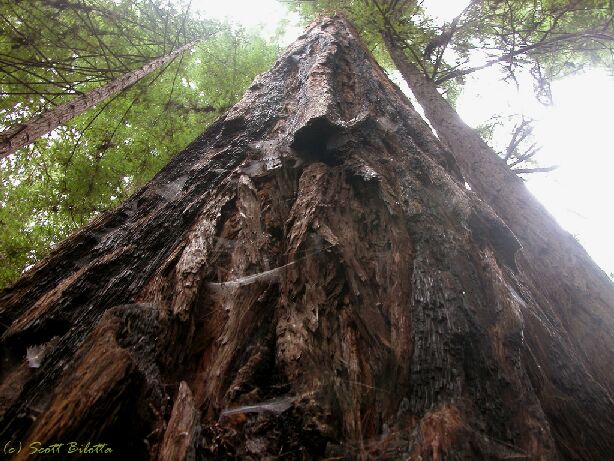 A wide variety of activities and facilities are available. There are over 250 family campsites in three different campgrounds, plus environmental camps, group camps, trail camps, and horse camps. Over 100 miles of trail await exploration by hikers, bikers, and horse riders. The South Fork Eel River provides fishing, boating, and swimming opportunities, and there are many day use areas for picnicking, family activities, or just enjoying the pristine environment.

Established in 1922 and named after Friend W. Richardson, the 25th governor of California, the park is bisected by Hwy. 101 and the south fork of the Eel River. Camping, hiking, swimming, and just relaxing are popular activities throughout much of the year. Fishing for salmon and steelhead is during the winter. 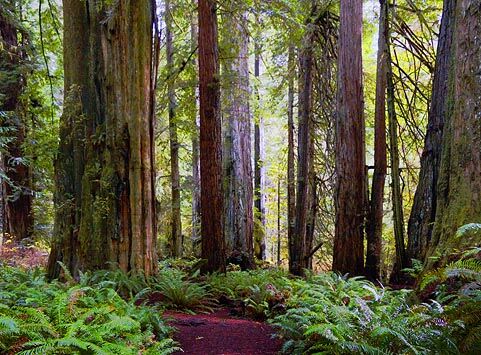 The 9th tallest coast redwood, a fallen tree ring study conducted in 1933, and a walk-through tree are immediately available.

The park offers a variety of summer nature programs during the summer including evening campfire programs, Junior Rangers, and guided nature walks visitor center and nature store are located in the historic 1930’s Richards Grove Lodge and are also open in the summer.

At the “gateway to the tall trees country”, Standish-Hickey State Recreation Area offers camping, picnicking, hiking, fishing, and swimming on South Fork of the Eel River which winds through the park for almost two miles. One of the few virgin redwood stands remaining in this area can be seen on the Grove Trail.

Standish-Hickey began as a 40-acre campground acquired by the Save-the-Redwoods League in 1922. It was named to honor Edward Ritter Hickey local lumberman who died of influenza while caring for the victims of the epidemic of 1918. In the late 1950’s, the Standish family donated over five hundred acres, and additional acquisitions through the years have brough the park’s total acreage to 1,012. Much of the land, clear- cut and then burned over in a disastrous fire in the mid-1940’s is just now regaining its former beauty. 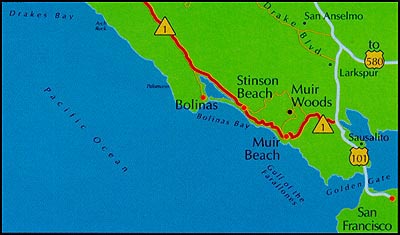 is a unit of the National Park Service in Marin County, California, 12 miles (19 km) north of San Francisco. It protects 554 acres (2.24 km²) of forested area populated by Coast Redwood 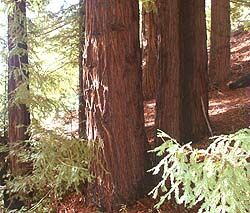 , one of the last remaining stands in the immediate San Francisco Bay Area.

has a rugged, natural basin forested with coast redwoods, Douglas fir and live oak. Ten miles of trails crisscross the canyon and its two streams, Peters Creek and Pescadero Creek. A short nature trail along Pescadero Creek introduces visitors to the natural history of the area. Visitors can see clam shells and other marine deposits from the time when the area was once covered by the ocean. The park has one of the tallest redwoods (300 feet high) in the Santa Cruz Mountains.

is a 3,200-acre redwood park in the Santa Cruz Mountains, featuring excellent hiking through the redwood groves. Only three miles from the coast, the park’s trails offer views of the ocean.

is the oldest State Park in California. It was acquired in 1902. The park has miles of trails, which serves hikers and equestrians, links Big Basin to 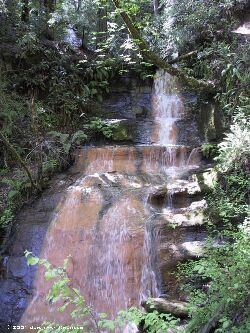 Castle Rock State Park and the eastern reach of the Santa Cruz range. The Skyline to the Sea Trail threads its way through the park along Waddell Creek to the ocean. The park has a surprising number of waterfalls, a wide variety of environments (from lush canyon bottoms to chaparral-covered slopes, many animals (deer, raccoons, an occasional bobcat) and lots of bird life (including Steller’s jays, egrets, herons and California woodpeckers). The park is also the home to stately redwood groves. It is the birthplace of the Order of the Mithril Star.

Fall Creek is the northern area of Henry Cowell Redwoods State Park. One of the park’s best kept secrets, it is 2,390 acres in size, and contains about 20 miles of hiking trails. Henry Cowell Redwoods State Park features 15 miles of hiking and riding trails through a forest that looks much the same as it did 200 years ago. Zayante Indians once lived in the area, where they found shelter, water and game. The park is the home of the Redwood grove, with a self-guided nature path, and Douglas fir, madrone, oak and the most unusual feature of the park, a stand of Ponderosa pine. The park has a picnic area above the San Lorenzo River. Anglers fish for steelhead and salmon during the winter. The Park has a nature center and bookstore. 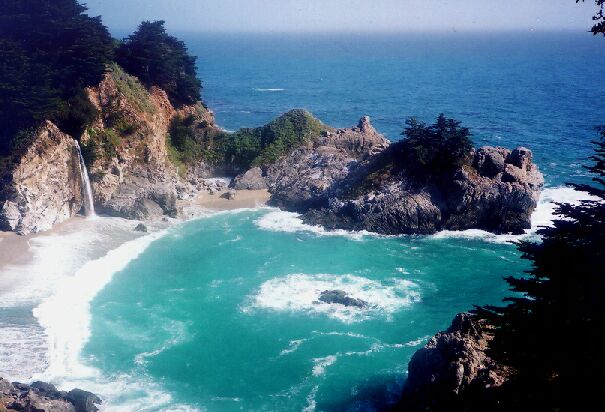 willows – plus open meadows. Wildlife includes fox, raccoons, skunks, and birds, such as American dippers and belted kingfishers. Hikers can enjoy the many scenic trails, including a self-guided nature loop. Overlooks provide spectacular views of the Big Sur Valley and the Big Sur River Gorge.

, Big Sur CA: Julia Pfeiffer Burns State Park stretches from the Big Sur coastline into nearby 3,000-foot ridges. The park features redwood, tan oak, madrone, chaparral, and an 80-foot waterfall that drops from granite cliffs into the The park also has a 1,680-acre underwater reserve which protects a spectacular assortment of marine life. Special-use permits allow experienced divers to explore the reserve. Seals, sea lions and sea otters can be seen in the park’s cove. Hikers can discover the park’s backcountry via several trail systems. 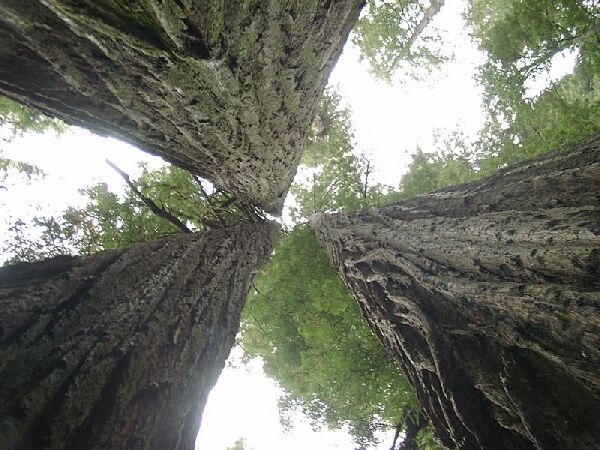