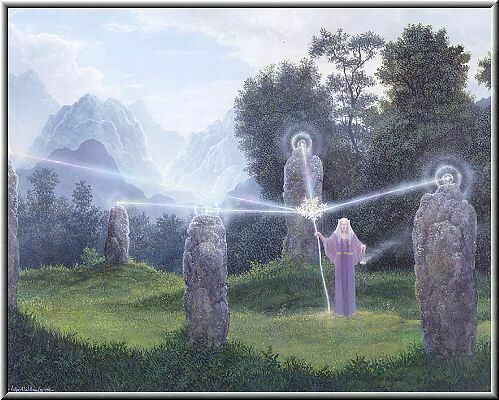 A Reformed Druid is one who simply believes that Nature is good. Now, we get into trouble as soon as we use the word believes. Other words or phrases like, adheres to the idea of or leans in the direction of the idea that or subscribes to the ideal that, may well be more accurate, but the bottom line is basically the idea that one’s spirituality can be found and based upon the manifestations of nature.

Nature is good, therefore, is the first characteristic of the Reformed Druid. Beyond that anything goes. No, really, anything goes. This is because of the whole history of the movement. The first Reformed Druids came together because of a rule at Carelton College in Minnesota that required attendance at religious services. The rule was broad enough that this group of precocious students decided to bend the rule for their own purposes. In that bending, the Reformed Druid movement was born

So, the second characteristic of Reformed Druids is that they bend or remake the rules to suit themselves.

Historically, Reformed Druids have avoided a lot of formal organization. The vast majority of them are solitary practitioners. A few hundred are gathered in small congregations, called Groves, of three or more individuals. The original group, the Reformed Druids of North America, has no central headquarters, no national organizational structure, no one to legislate rules. In fact, local Groves make up their own rules and traditions as they go along. To be sure, there are some traditions, an order of worship, and other loose rules, that many Groves abide by, but its all optional there is no central body (anymore anyway) around to assure that every organization within the Reformed Druid movement follows exactly the same path.

A few larger groups within the Reform have a more pronounced structure, but even these larger more organized groups are self-defined, and they pretty much do what they want to, or just simply make it up as they go.

That’s the third characteristic of a Reformed Druid: one who makes it up as s/he goes and decides for himself what traditions, or none, s/he will follow.

Now to be sure, there are a few groups out there who attempt to define a Reformed Druid based upon their own agenda. Usually these definitions crop up in attempts to point out how this group or that group isnt of the Reform, but such exercises are anti-Druidic, since they violate the very principles the Reform was founded upon. Even this essay I am writing now, violates those principles, so I am attempting to thread carefully here, knowing that I walk upon a steep, slippery, winding, twisting, road with deep chasms on either side.

The best that can be said then, for Reformed Druids collectively, is that they are largely, a non-prophet, ir-religious, dis-organization.

Anyone can be a Reformed Druid. How do I join? You just did! affirms Michael Scharding on his popular website that explores all things Reformed Druidic. The simple matter of affirming that Nature is good, allows you to enter into the fellowship of Reformed Druidry. After that, you have a lot of choices, or none, depending on your own desires and comfort level. Groups can also join the Reform en masse theres no rule against it anywhere in A Reformed Druid Anthology (ARDA) (a collection of Reformed Druid documents, traditions essays, etc. – some of which are mutually exclusive and/or contradictory – maintained by Druid Scharding). Schisms are aplenty within the Reform, usually precipitated by arguments over the ARDA (and some Druids just love to argue). The best way to avoid such fights is to simply not participate. Since theres no authority, no Council of Dalon ap Landou, such arguments carry no real weight anyway. Ignore your detractors and do whatever the hell you want your word is as good as anyone’s.

No one can kick you out of the Reform. Leaving is your decision and yours alone. Likewise you are free to form any group you wish, no one can stop you. So long as Nature is good (or groovy, or wonderful, or some other adjective for goodness) you can do whatever you want you are still a Reformed Druid. You dont have to be Celtic, you dont have to be Neo-Pagan (the RDNA traditionally allows you to be a practicing Catholic, Buddhist, Jew, Fundy, anything, and maintain your status as a Druid). (Note: Other groups within the Reform do have some have dos and can’t bes, but traditional Reformed Druidism eschews all that).

I believe that there are a lot of Reformed Druids who do not even know they are Reformed Druids. I would be a good example. Since the late ‘60s, my own personal spirituality has been nature oriented. At first I thought I was simply, a witch, but in actually researching Witchcraft and Wicca, found the pieces didnt all fit. There were too many requirements. Rosicrucianism likewise was too cumbersome, and neo-Paganism was too broad an umbrella. I briefly belonged to the Church of All Worlds (CAW), but found they had their own issues, and they were bogged down in over-organization. I likened a lot of these groups to tables: very beautiful and ingeniously designed and organized, but, unlike the tree they were crafted from, they were dead. Its better to have organism (and multiple orgasms!) then to have organization.

It was in the late summer of 1995 that I met my first Reformed Druid, at the unlikely venue of a New Age Renaissance Faire in San Jose CA. He kind of gave me a brief overview of what Reformed Druidism was all about. That and subsequent research into the Reform, eventually led me to declare myself a Reformed Druid.

I’m a people person. I don’t personally function well as a solitary, so after searching locally (at the time was living in Santa Cruz CA) and not finding anyone, a CAW friend of mine and I dreamed up the Order of the Mithril Star, and loosely based it on a melding of CAW and Reformed Druids of North America (RDNA). To be sure much of it is our own interpretation, and that interpretation has itself evolved and morphed over the years, but OMS is still an accurate reflection of what Reformed Druidry is all about. I think probably more so than even some of the other RDNA schisms.

Well, you cant please everyone can you?

And, why do you have to?

Most of us left our parents’ religions (in my case the two most guilt-ridden of the major faiths) because we wanted to get beyond all the rules: the mores, the dietary laws, the have tos and cant dos. Reformed Druidry promises a better way a spirituality defined by your own ideals, and elastic enough to adapt as your ideals morph and evolve.

If we wanted a lot of have tos, cant dos, and this is the way it HAS to be es, we could have all saved ourselves a lot of trouble and we would have been better off staying in our parents’ religions.

So, the spirit of Reformed Druidism is best defined by this phrase: Were doing religion the old fashioned way: were making it up as we go!

Note: The above is the solely the opinion of Ellis “Sybok” Arseneau and may or may not reflect the opinion of other members of the Reformed Druids of Gaia. Sybok is very opinionated about all sorts of things, some of which may or may not be any of his business. Visit his blog: https://el.avalonrisen.com