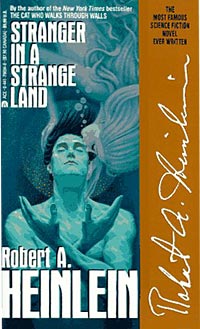 The book was written in 1961, and reflects the attitudes of the time. Almost everyone back then was homophobic and Heinlein was no exception. However, he changed over time and before he passed away
he stated that had he to write Stranger over again, he would treat gays with a lot more affection and tolerance, and he might even had written Michael as a bisexual.

Q: What about women? Aren’t all his women a little too eager to please the men the book?

Again, consider that the book was written in 1961. Heinlein has an almost “Playboy Philosophy” in the exposition of his female characters. This is also something he said later on he would have changed if he were to write Stranger over again. Heinlein deeply loved his second wife, Virginia, who was both a feminist and a Wiccan. Through her and over time, his attitudes totally changed regarding women.

Q: Since the RDG is “inspired” by SiaSL, do these same attitudes towards gays and women prevail in the Reform?

We can assure you this is not the case. We are privileged to have a number of LGBTQ persons in our membership (and the present Senior Archdruid, Ceridwen Seren-Ddaear, is bisexual and a feminist). Likewise, women have equal rank and privilege with men in the Reform. In addition, we encourage the development of gay and lesbian ‘nests’ within our Groves.

Q: What about this “group marriage” / “nest” thing? Isn’t that impractical? What about jealousy?

We feel that jealousy is a learned emotion. Like homophobia and misogyny, it can be unlearned. With the failure of close to 70% (and rising) of monogamous marriages being directly attributable to “affairs” and “unfaithfulness”, we believe that it is obvious that most human beings are not monogamous and never have been. In fact, monogamy, like monotheism, goes against the laws of Nature. We therefore encourage the truth: “polyfidelity” is the natural state of human beings. Let’s therefore get over the “monomyth” and get on with living happy, healthy, polyamorous lives.