“Lugnasadh, which is the beginning of the period of Foghamhar,
shall yemark in the coming together in groups in order that
ye may feast upon thefruits of the Earth-Mother; and then
shall ye offer up a sacrifice unto your prosperity. “
~~DC(R) The Book of the Law, 4:7

This Holiday honours the Sun God, Lugh who has many names and titles: Lleu/Lugh/Lugus, Lugh of the Long Arm, Lleu Llaw Gyffes, Warrior God of Justice, Travellers and Crafters. He is All Skilled, and is the Samildánach; the “Many-Gifted One”. Sun Lord. Master of all the Arts. The Shining One. God of Light. Lord of All Four Corners.

The name Lugh means “light”. He is the Child of the Sun. Lugh is also the God of grain harvests, of crafting, metallurgy, grains & breads, looms, and fire. Stories tell that He had taken on human form to worship among the Druids. 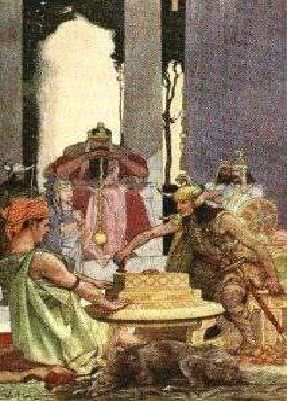 Lugh is known as a defender of the people, especially those who may be threatened by the forces of Nature. Lugh’s Spear is the flash of Light which pierces the Darkness. He is Energy. A Sun God and God of the Sky and of Lightening, as well as of Death and Rebirth. He is Mage, Alchemist and Sorcerer. Lugh is seen as a God of Triplicity; as passionate Youth, wise King and Sage Elder. He embodies the Male dualities of Fire and Air. He is the Sacrificed God and is Protector and Defender. Lugh teaches us not to fight battles out of anger, but to fight for causes that are just and right. He teaches us to honour our promises and our oaths.
I am the sovereign splendor of creation
I am the fountain and the courts of bliss
I am the bright surrender of the willpower
I am the watchful guardian and the kiss
I am the many-coloured landscape
I am the transmigration of the geese
I am the burnished glory of the breastplate
I am the harbour where all strivings cease.
~~ Written by Caitlin Matthews 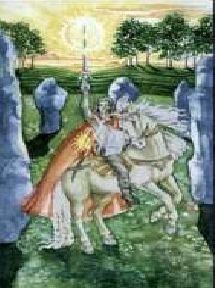 Sa), in Welsh as Gwyl Awst (August Feast), as Lla Lluanys or Laa‘n Ouyr (Day of the Harvest Season) in Manxand as Lammas, Apple Day and Harvest Home in English. It is the anniversary of the funeral games given by Lugh, the God of All Crafts, in honor of his Father. Essentially a harvest festival, this signals the
beginning of the harvest season and the ripening of the apples (as well as other fruits and vegetables). Enormous quantities of applejack, hard cider, mead and other alcoholic beverages are consumed at this time (it‘s almost a duty!) by all enthusiastic Neopagans. Hasidic Druids may prefer to drink ten-day-old slivovitz (plum brandy) at this time, but it‘s their stomach lining!

This holiday is a day of mixed joy and woe (Irish wakes are an old tradition), for it is by now obvious that the days are getting shorter. Stories of the battles
between Lugh and Balor (the good Sun-Fire God and the bad one) are retold, as the autumn quarter of Foghamhar begins. Although in the heat of summer it might be difficult to discern, the festival of Lammas (Aug 1st) marks the end of summer and the beginning of fall. The days now grow visibly shorter and by the time we’ve reached autumn ‘s end (Oct 31st), we will have run the gamut of temperature from the heat of August to the cold and (sometimes) snow of November.

The celebration proper would begin on sundown of the previous evening, our 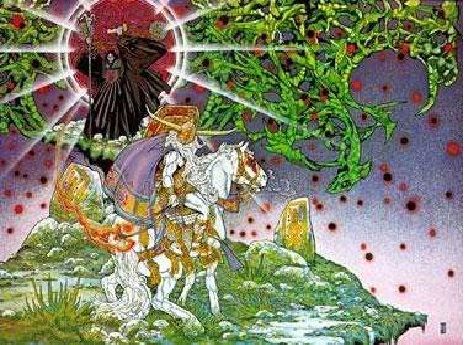 July 31st, since the Celts reckon their days from sundown to sundown. British Druids often refer to the astrological date of Aug 6th as Old Lammas. This date has long been considered a ‘power point’ of the Zodiac, and is symbolized
by the Lion, one of the ‘tetramorph’ figures found on the  Tarot cards, the World and the Wheel of Fortune (the other three figures being the Bull, the
Eagle, and the Spirit). Astrologers know these four figures as the symbols of the four ‘fixed’ signs of the Zodiac, and these naturally align with the four Great Sabbats of Druidry. Christians have adopted the same iconography to represent the four gospel-writers. 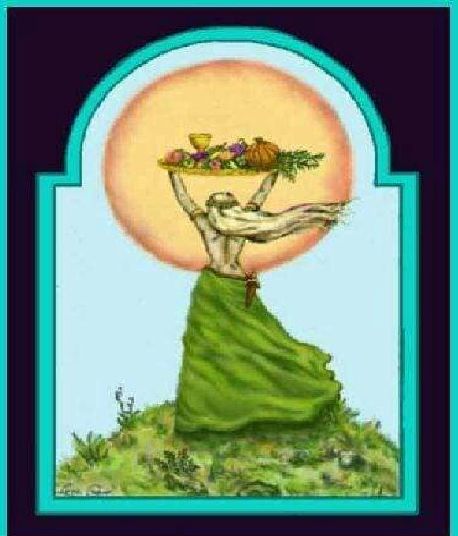 ‘Lammas’ was the medieval Christian name for the holiday and it means ‘loaf-mass,’ for this was the day on which loaves of bread were baked from the first grain harvest and laid on the church altars as offerings. It was a day representative of ‘first fruits’ and early harvest. In, Ireland the feast was referred to as ‘Lughnasadh,’ a feast to commemorate the funeral games of the Irish sun-god Lugh. However, there is some confusion on this point. Although at first glance, it may seem that we are celebrating the death of the Lugh, the god of light does not really die (mythically) until the autumnal equinox. And
indeed, if we read the Irish myths closer, we discover that it is not Lugh’s death that is being celebrated, but the funeral games which Lugh hosted to commemorate the death of his foster-mother, Taillte. That is why the Lughnasadh celebrations in Ireland are often called the ‘Tailltean Games.’

One common feature of the Games were the ‘Tailltean marriages,’ a rather informal marriage that lasted for only ‘a year and a day’ or until next Lammas. At that time, the couple could decide to continue the arrangement if it pleased them, or to stand back to back and walk away from one another, thus bringing the Tailltean marriage to a formal close. Such trial marriages (obviously related to the Pagan ‘Handfasting’) were quite common even into the 1500’s, although it was something one ‘didn’t bother the parish priest about.’ Indeed, such ceremonies were usually solemnized by a poet, bard, or shanachie (or, it may be guessed, by a priest or priestess of the Old Religion).

Lammastide was also the traditional time of year for craft festivals. The medieval guilds would create elaborate displays of their wares, decorating 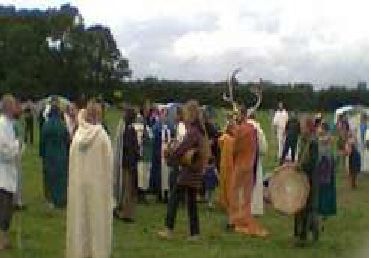 their shops and themselves in bright colors and ribbons, marching in parades, and performing strange, ceremonial plays and dances for the entranced onlookers. The atmosphere must have been quite similar to our modern-day Renaissance Festivals. Then there is the story of how Lugh wanted to get married, but he had a “geasa” (taboo) put upon him by Arianrhod that he could never marry a woman of mortal birth…so his uncle Gwydion used his “arts” (along with another personage named Math) to create for Lugh a woman made from nine flowers…
Nine powers of nine flowers,
Nine powers in me combined,
Nine buds of plant and tree.
Long and white are my fingers
As the ninth wave of the sea.
~~ Hanes Blodeuwedd

Blodeuwedd is the Welsh Maiden Goddess, revered on Avalon as the Goddess of new beginnings, independence and empowerment. The story which 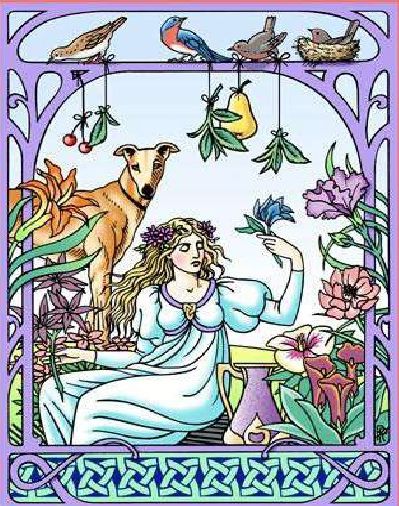 patriarchy has to tell of Blodeuwedd can be found in the branch of the
Mabinogion called Math, Son of Mathonwy. She is made of Nine Flowers by the great magicians Math and Gwydion, to be the Bride of Llew, the Welsh Sun God. Sometime later, she chooses another lover, who attempts to slay Her husband, but Llew instead turns into an Eagle. Llew is found and restored by Gwydion, who transforms Blodeuwedd into an Owl as punishment. There is much more to this story than meets the eye… look beyond what is written to see the truth…the story continues in the next season…
The name “Blodeuwedd” means “Flower Face”, which refers to Her Flower origins as well as her association with the owl…. which in Wales, still bears Her name: Blodeuwedd.