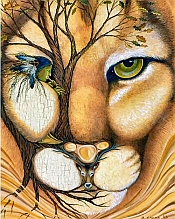 The Grove’s name is Welsh for, “Circle of walkers between the worlds,” which defines ours as a shamanistic expression of Reformed Druidism. Located in Humboldt County CA, the Grove once served as the “Mother Grove,” or headquarters, for the Reformed Druids of Gaia, an international fellowship of Reformed Druids.

Humboldt County is blessed to be the main manifestation (and tourist destination) for the Coast Redwood, Sequoia Sempervirons, which are the tallest trees on Earth.  The Redwood growing region runs along the Pacific Coast from the Oregon border, south, to just past Big Sur CA, and about thirty miles inland.  Although this vast region was once the largest rainforest on the planet, today less than 3% of it is left, the ecological victim of Capitalism. Those forests which survive are mainly located in California Redwood State Parks, in Redwood National Park, and Sequoia National Park (home of the Giant Sequoia, Sequoiadendron Giganteum).  The Coast Redwood is the official tree of the Order of the Mithril Star, RDG.