The last big holiday of the year, the Fall Equinox (sometimes called Michaelmas and the Feast of the Hunters) is a Minor High Day occurring somewhere around September 21st or so. This is a Thanksgiving feast and signals the beginning of the Hunting Season (for deer and other large game) in many parts of Europe and North America. Thus, it is dedicated to the Hunting and Fishing Gods and the Gods of Plenty, in thankfulness for benefits received and hoped for. Outdoor picnics in the woods are a popular Druid tradition in those areas where the weather is still good at this time of year. Hunting magic may be minimized by those Groves living in areas where game is a little dear. 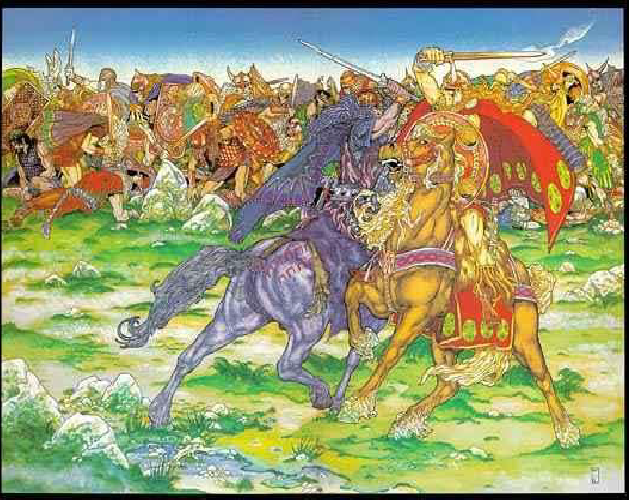 Mythically, this is the day of the year when the god of light is defeated by his twin and alter-ego, the god of darkness. It is the time of the year when night conquers day. The Autumnal Equinox is the only day of the whole year when Llew (light) is vulnerable and it is possible to defeat him. Llew now stands on the balance (Libra/autumnal equinox), with one foot on the crochan (Cancer/summer solstice) and his other foot on the goat (Capricorn/winter solstice). Thus he is betrayed by Blodeuwedd, the Virgin (Virgo) and transformed into an Eagle (Scorpio).

Two things are now likely to occur mythically, in rapid succession. Having 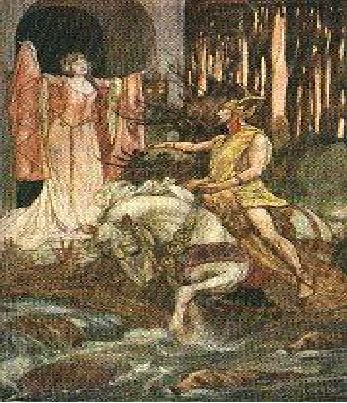 defeated Llew, Gronw Pebyr (darkness) now takes over Llew’s functions, both as lover to Blodeuwedd, the Goddess, and as King of our own world. Although Gronw Pebyr, the Horned King, now sits on Llew’s throne and begins his rule immediately, his formal coronation will not be for another six weeks, occurring at Samhain (Halloween) or the beginning of Winter, when he becomes the Winter Lord, the Dark King, Lord of Misrule. Goronwy’s other function has more immediate results, however. He mates with the virgin goddess, and Blodeuwedd conceives, and will give birth — nine months later (at the Summer Solstice) — to Goronwy’s son, who is really another incarnation of himself, the Dark Child. 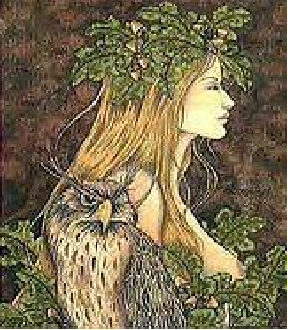 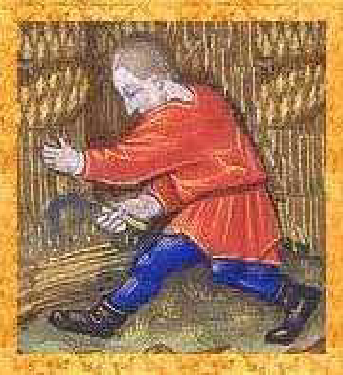 spirit of the fields. Thus, Llew represents not only the sun’s power, but also the sun’s life trapped and crystallized in the corn. Often this corn spirit was believed to reside most especially in the last sheaf or shock harvested, which was dressed in fine clothes, or woven into a wicker-like man-shaped form. This effigy was then cut and carried from the field, and usually burned, amidst much rejoicing. So one may see Blodeuwedd and Gronw Pebyr in a new guise, not as conspirators who murder their king, but as kindly farmers who harvest the crop which they had planted and so lovingly cared for. And yet, anyone who knows the old ballad of John Barleycorn knows that we have not heard the last of him.

In the rhythm of the year, Mabon marks a time of rest after hard work. The crops are gathered in, and winter is still a month and a half away! Although the nights are getting cooler, the days are still warm, and there is something magical in the sunlight, for it seems silvery and indirect. As we pursue our

gentle hobbies of making corn dollies (those tiny vegetation spirits) and wheat weaving, our attention is suddenly arrested by the sound of baying from the skies (the ‘Hounds of Annwn’ passing?), as lines of geese cut silhouettes across a harvest moon. And we move closer to the hearth, the longer evening hours giving us time to catch up on our reading, munching on popcorn balls and caramel apples and sipping home-brewed mead or ale.