“Ye shall celebrate on the day of Midwinter, for on that day doth the sun begin to rise in the south; so shall ye celebrate it with the burning of logs and making merry” – DC(R) The Book of the Law, 4:3

The Winter Solstice is a Minor High Day, usually occurring around December 21st or so of the civil calendar. Also known as Yule and Midwinter, this is a day sacred to Sun Gods, Thunder Gods and Fire Gods. Large fires were built up outdoors and a Yule Log lit indoors, in order to rekindle the dying Sun and help it to return brightly to the Northern skies. Burnt logs and ashes from Midwinter fires were kept as a talisman against lightning and house fires. It was also a custom in many parts of Paleopagan Europe to decorate live evergreen trees in honor of the Gods (cutting down a tree to bring indoors seems a blasphemous desecration of the original concept). This is considered, along with Midsummer, the best day of the year to cut mistletoe. 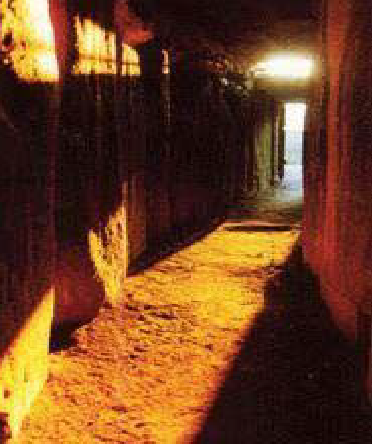 In the Bru na Boinne (Valley of the Boyne river), County Meath, Ireland there is a fascinating structure of mystery and myth called Newgrange, or Uaimh na Gréine (The Cave of the Sun). The current best guess places its construction 5,200 years ago to 3,200 BC. This dates the structure to a time before the building of Stonehenge and the Great Pyramid at Giza. The age of this “monument” makes it one of the most important archaeological finds in Europe.

The structure contains a roofbox, which allows the morning sun to shine into

the chamber on the Winter Soltice. The Winter Solstice is the shortest day of the year and symbolized the ‘return of light’ or the start of a New Year. This is a function usually reserved for Temples and Newgrange is the only passage grave so far excavated which has this characteristic. Was the site a one-time temple that was later modified into a tomb?

In Irish Myth and Legend, the Sidhe are associated with the Tuatha De Dannan (Gaelic for People of the Goddess Danu). Newgrange itself was the home of Aenghus mac Og, the Great God of Love. It is said that he won his home by a trick, as he had been away when the magical places of Ireland were parceled out. Upon his return, he begged to use Newgrange for day and night. When it came time for the owner to reclaim his land, Aenghus refused, saying that all time could be divided by day and night. Apparently after consulting a higher court, Newgrange became Aenghus’ forever and he lived there with his wife Caer Ibormeith.

Among some Paleopagans, a date on or near this (such as December 25th) was celebrated as the Birthday of the Sun God, frequently from the womb of a virgin or unmarried girl (who was sometimes also the Mother Goddess).
This is the shortest day and the longest night of the year. It was believed by the ancients that the Sun had died and then was reborn on this day, as indeed it seems to do, since the days begin to get longer and the nights shorter until the Summer Solstice, when the process reverses itself. It was easy for Christians to come along and co-opt this. Since it was the birthday of the Sun God, it was easy to turn it into a birthday celebration for the “Son of God”, and then move it a few days to December 25. Even in Christian mythology, much of the Christmas story is taken from myths of the Sun Gods from other mid-eastern pantheons, right down his being born of a virgin. 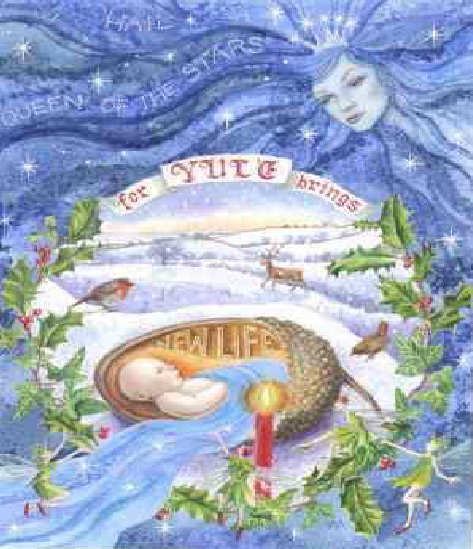 The trappings of Yule are predominantly Pagan. The evergreen tree decorated with lights, the wreath, the holly and mistletoe, even some of the carols, all have origins in European Paganism, as do the parties and the general sexual license that dominates the holiday.

Among Pagans there are a lot of options for designing ritual around this. There is the Celtic story about the Holly King and the Oak King for example, which makes for a good mystery play. But there are lots of other variations and, in the Reform, we don’t have a set tradition for this. Creativity is the key. This is a holiday for fun, so make your rituals as fun as possible.